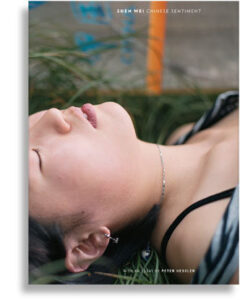 Published by Charles Lane Press in 2011.

In recent years, China has proffered tantalizingly fertile landscapes to photographers exploring the socioeconomic impact of its arrival as a superpower. Such projects typically hew closely to well-established narratives, revealing an obvious truth: that China is undergoing a radical wave of transformational change.

In his first monograph, Chinese Sentiment, Shen Wei has performed a radical act in its own right by sidestepping all such cliché. Instead, he presents a vision of his homeland that peers deep beneath the surface, plumbing the psychological shades of gray, and finding a nation ambivalent to its perpetual state of suspension between past and future.

Running counter to virtually every Western interpretation, Shen Wei reveals the human scale of China: a lone figure observed through the trees; the stolen glance of a young girl; a moment of repose in the bedroom. With nuanced observation and a serene visual style marked with wit and compassion, the seventy-five images in Chinese Sentiment render a complex portrait of modern China.

Employing the language of photography in a manner both dreamlike and cinematic in scope, Chinese Sentiment gracefully limns the interior life of a nation in the throes of epic change.

The introduction is by Peter Hessler, staff writer and former Beijing correspondent for The New Yorker. Hessler is the author of three books on China, including Country Driving, A Journey Through China from Farm to Factory (Harper, 2010). Chinese Sentiment was guest-edited by Lesley A. Martin, publisher of the Aperture Foundation book program.